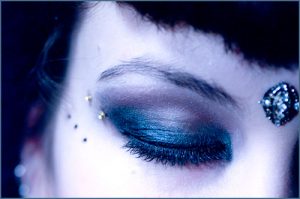 Wiebke was born May 1984 as a child of the stormy sea near the coast of the Great North Sea. Soon her parents noticed she had a gift for more than paring crabs: a great talent was quietly being awakened.

At the tender age of six summers, they sent their chubby-cheeked child, armed with a sheaf of paper and a quill, to learn the trade of illustration. Our little heroine struggled through adversity, conquered millipedes and the odd hare and crab, became tall and taller, learned and painted, and grew up to be a beautiful, lovely and learned maiden.

She went to learn in Bremen – and, oh, she was a diligent student. But she demanded even more of herself, and continued to paint and draw and learn, until the great wise men of far Hanover´s university heard of her wonders. They called her to their academy, and so it came to pass that her greatest desire came true: she studied the high art of graphic illustration.

Now all the world expected her to take a strapping man to husband, bear children and lead a cosy life at home, maybe spiced with the odd painting here and there – but no! she wedded a man, it is true, but she resumed studying, being drawn to higher aspirations.

She wanted her art to serve humanity – to adorn the bodies of men and women, and so she resolved to become a tattooing artist. 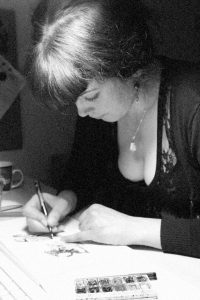 Oh yes… often she cursed the recalcitrant canvas that was to bear her new art, but she felt inner joy with every sting of her magic tattooing device; needling others had always been her pastime, but she also knew she was on the right path, She had arrived on her road of life.

Keep your eyes peeled for this divine, tall and long-haired woman. And if you do, you might hear the beat of fiery hooves, or see the four proud black horses that draw her tattooing coach through the lands.